Two years ago I decided to make documentary about coaching which would inspire one million people around the world. My wife, kasia, and I had the idea, but we had no funds to turn this dream into reality. So, like more and more entrepreneurs and creatives around the world, we turned to crowdfunding.

After a lot of trial and error and many expensive mistakes, we figured out the crowdfunding formula that allowed us to raise $185,000 on Indiegogo, becoming the most funded European documentary in the platform’s history, and a attract a further $615,000 through private investment.

We’ve since worked with other filmmakers, using what we’ve learned to help them tap into the potential of crowdfunding and turn their vision into a reality. The latest project we coached was the campaign for a docudrama called THINK - The Legacy of Think and Grow Rich.

By using our strategies they hit their target of $100,000 in under two weeks, and went on to break the record for the most funded documentary ever on Indiegogo, with over $350,000 raised.
Provided you have a good idea and the passion and commitment to bring it to the world, then I fully believe that crowdfunding can help you raise the funds that you need to bring your dream to life.

Just like a good movie, an effective crowdfunding campaign needs a strong set up in order to succeed. Here are five steps to set yourself up for crowdfunding success.

Step 1: Get an attractive and simple domain name

To run a successful crowdfund, you’re going to need a clear, memorable domain name for your website. This should be something that you can communicate easily over the telephone, something simple, relevant and keyword focused.

For our movie about coaching, we got the domain name ‘www.CoachingMovie.com.’ Your domain name should clearly reflect that central purpose of this particular project.
If you already have your own name brand or a central project, you should keep this domain name separate from your other activities. Focus it exclusively on the project for which you are raising funds.

The idea is that you can mention this project to someone in conversation, and they can easily type it into their browser without having to think. Avoid special characters like hyphens. Keep it as simple as possible.

Make it simple and easy
for anyone to remember

To motivate people to get on board it’s essential that early on in the process you define a central mission that is both inspirational and measurable.

The mission for LEAP, our coaching movie, is to inspire one million people to be more successful in life and business. This message is shouted from the rooftops, is written at the very top of our website and is part of nearly all marketing and investment related material that we send out.

You mission should be:

Your mission helps unify people behind you and makes your project stand out. It’s much easier and more tempting to get behind a mission than merely a product.

Your website is your business card to the world. Do not be afraid to spend some money on a great website which doesn’t only look good on the desktop computer, but is also responsive which means it looks great on mobile phones and tablets as well.

If you’re not a technical person, it’s easy to outsource this - just google ‘hire a website developer.’ Outsourcing is a great strategy because it allows you to focus on what you do best and leave the other aspects to those with specific skills.
Use a CMS like WordPress to make it easy for you to update and change your website without technical skills. Feel free to use our film website, www.CoachingMovie.com as an example. Just send it to a freelancer and say ‘I want to create a website that looks like this.’

Get the number one people in your industry to support you early on in the process and future investors will be eager to join. Begin at the top and find world class collaborators before you even begin and they’ll lend credibility and prestige to your project right from the start.

One of the earliest people to come on board for our film LEAP was Marshall Goldsmith, the world's #1 executive coach. From that moment many people in the coaching industry looked up to our project and we were quickly joined by Mark Thompson advisor to Richard Branson and Steve Jobs. Once we had Mark, Marshall and other big names like Jack Canfield on board, many others were eager to join in.
Inspire big names with your mission and your passion. If you’re sincere and authentic, they’ll respond to you and then others will follow in droves. 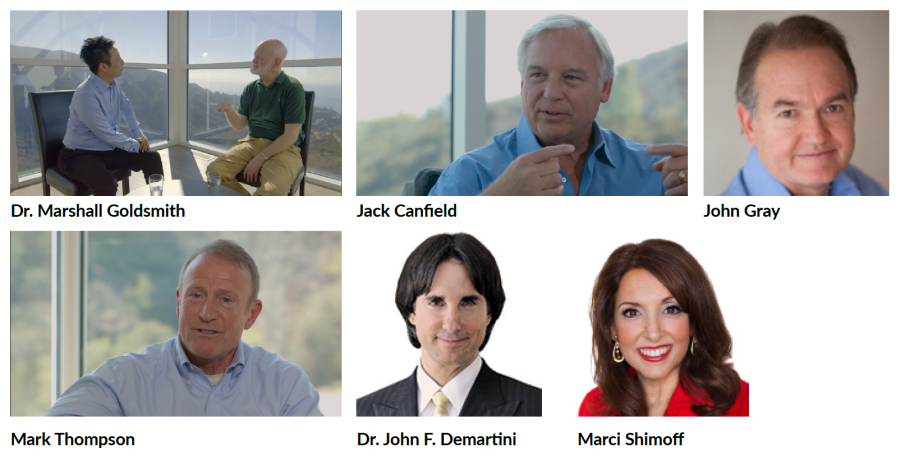 At the beginning calculate exactly how much money you need to raise in order to be certain that your project will make it.

Your ‘minimum go point’ isn’t your full fundraising target. It’s when you know for sure that you’re in business, that you’re going to pull it off.
For ‘LEAP’ we knew that we needed to raise $200,000 to make the film that we had dreamed of. So our minimum tipping point was half of this. We knew that if we were able to raise $100,000 in our first 6 months of looking for investors, then we'd definitely make it to $200,000.
We didn’t launch our crowdfunding campaign until we had already reached our minimum ‘go point’ by raising funds from private investors in advance. Before bringing our project to the world, we wanted to be certain that we were going to be successful.

Depending on the scale of your project just one investor may be enough to put you over the edge. Whatever the amount make sure you’re clear on this right from the start so that when it’s time to begin the crowdfunding campaign you are promoting from a place of confidence and certainty.

Know in advance the exact ‘Go Point’ when you’ll say
“yes, this Is going to work!”

With your brand new website on a memorable domain, celebrity ambassadors and an inspiring central mention, you’re well on your way to reaching your minimum go point and charging forward with a successful crowdfunding campaign.

Of course, this is just the beginning. Raising funds is intense work, and it took me 9 months of full-time effort to raise the first $200,000 for LEAP. But if your vision is exciting enough to have taken you this far, then it will be motivating enough to keep you going until you reach your goal.

Stay connected with the mission that made you want to create your film in the first place and other people will be inspired by your passion to rally around your movement. By the time your crowdfunding campaign wraps up, you may find that you’ve not only hit your fundraising target, but you also have an eager audience in place waiting to take your film to the world.